It is common knowledge that parcel carriers hike their rates, modify their fuel indices and announce a general rate increase (GRI) each year. The net result is that parcel shipping costs increase by the rate increase minus the fuel index reduction. For the 2013 GRI, both UPS and FedEx reduced their fuel index for air shipments by 2% and 1% for ground shipments. These changes were announced in November and December, 2012.

In November 2012, UPS quietly changed the fuel price breaks used to determine their fuel surcharge percentage. This wasn’t a simple increase or a decrease; it changed the slope of the index. At lower fuel prices, the surcharge would increase, and at higher fuel prices the surcharge would be less than before. Chart 1.0 below shows the original 2012 index against the November 2012 index. Changes to the ground index had a similar effect. 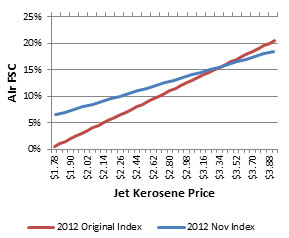 
We might speculate from this change that UPS is trying to decrease the effects of fuel price volatility while hedging on cheaper fuel prices in 2013. At the November fuel prices, this change was insignificant and the UPS fuel surcharge did not diverge from FedEx.

However, if we look at the new 2013 fuel indexes for UPS and FedEx they tell us a different story (see chart 2.0). While FedEx air FSC is at 0% for $1.90, UPS FSC is 5%. The gap closes as the kerosene price goes up to $3.40, and after that point UPS FSC is lower than FedEx. This has caused UPS and FedEx to post different fuel surcharge percentages for January, 2013.

This change is notable not only because it is the first time in many years that UPS and FedEx fuel prices have diverged, but because it changes the calculation for determining how the 2013 GRI will affect costs. 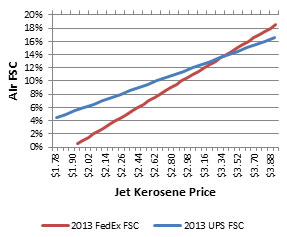 The 2013 UPS GRI cannot be calculated as simply as deducting 2% from the 6.5% rate increase. For lower fuel prices, the GRI could be as high as 10%. The announced GRI of 4.5% only applies if the jet kerosene prices float around $3.40.

As with any GRI, the net effects cannot be calculated by applying the announced GRI to the total transportation spend. A detailed analysis of shipping behavior is required to determine the true increase to parcel shipping costs.

Baris Tasdelen is a senior analyst with envista and past PARCEL author. Contactwww.envistacorp.com for more information.

When Customers Run the Warehouse: A View of the Not-So-Distant Future of Distribution Management Next
Supply Chain Basics: The Players - Part Four Previous
More from Featured Articles

Protect Your Shipments During the Holidays
More From Baris Tasdelen
Articles