The price of crude oil is down from $100 last year to $66 in December 2014, and to $45 in January 2015. The reduction in crude is reflected in diesel and kerosene prices, albeit with a slight delay. This in turn means lower fuel surcharges for parcel shippers and any other modes of transportation subject to fuel surcharges. Since parcel carriers use U.S. Department of Energy fuel indices , from two months prior, shippers would have normally benefited from the lower fuel surcharges in early 2015. However, the drop in fuel prices triggered UPS and FedEx to adjust their Fuel Surcharge indices in January 2015, so the surcharges will not go down significantly as they would have under the old carrier indices, and for FedEx Ground, it will go up.

A Brief History of Parcel Fuel Surcharges:
UPS and FedEx used identical fuel indices for most of the last ten years; one table for Air services, based on Jet Kerosene price, and one table for Ground services based on On-Highway Diesel price. Over the last decade most annual rate increases included a 1-2% reduction of the carrier fuel indices accompanying the increase of the base rates. However, in November of 2012, UPS adjusted their indices to be less volatile. That is, as the fuel prices fluctuate, the fuel surcharge would adjust less. For the past two years, fuel has been relatively stable, and the delta between UPS and FedEx fuel surcharges has ranged from 0 percent to 1.5 percent, with UPS being higher. Neither UPS nor FedEx have adjusted their fuel indices since 2013; until now.

Low fuel prices push FedEx and UPS to adjust their fuel tables:
As fuel prices kept hitting new lows, the FedEx Express fuel surcharge would have fallen to 0% in February. For UPS, the Air Fuel Surcharge would have dropped to 4.5%. FedEx announced a change to their air and ground fuel tables that would go into effect on February 2, 2015. UPS changed their index in late January, with no announcement. With the new fuel index, FedEx Express Fuel Surcharge will be 3.5% and UPS Air Fuel Surcharge will be 5% (based on December Jet Kerosene price of $1.801). The following chart shows Air/Express fuel indices for UPS and FedEx before and after the change. 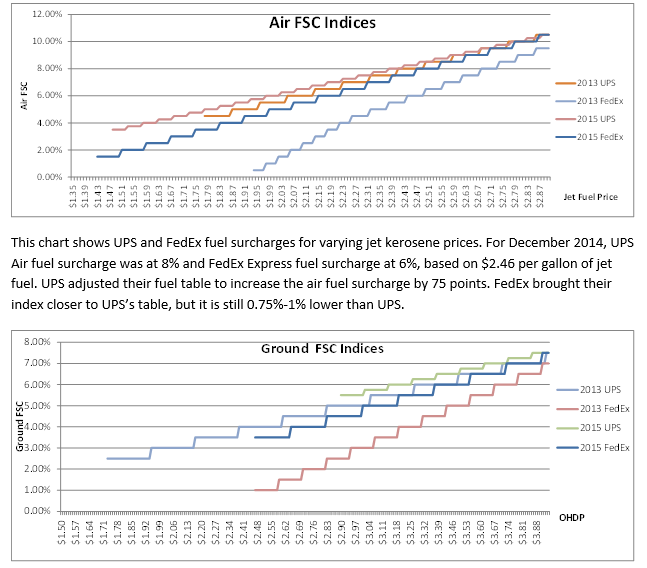 The picture is similar for the Ground fuel surcharge; UPS FSC is higher than FedEx, up to 1% around $2.90 per gallon of diesel. This delta would increase if the diesel price goes lower.

The fuel surcharge is one of the cost components that is hard to analyze, mainly because it depends on multiple variables. The oil prices going down would suggest lower fuel surcharges, however carriers protect themselves by opportunistically adjusting the indices. Carriers build some of the fuel cost into the transportation charges, and the variable fuel surcharge cover only a part of the fuel cost. Thus it should be normal for fuel surcharges to disappear at low fuel cost, as a portion of these fuel costs have already been shifted to the base rates in previous years. It is also interesting that, between 2008 and 2012, the annual rate increase was announced as the sum of transportation rate increase and the fuel reduction. That is, a 4.9% rate increase would be 6.9% increase to the transportation charges and a 2% reduction to the fuel index. Carriers implemented a fuel index adjustment very early in 2015, however both kept it out of the GRI calculation.


Baris Tasdelen is Transportation Analyst, enVista. For more information, visit www.envistacorp.com. The changing fuel surcharges, 2015 general rate increase, and the DIM rule change in 2015 will add to the complexity of calculating the true cost of parcel shipping. enVista Transportation Solutions, Consulting group can help analyze the impact of these changes to shippers’ bottom line.

Adding Fuel to the Fire Next
2015: A Dynamic Year for Shipping? Previous
More from Featured Articles

Protect Your Shipments During the Holidays
More From Baris Tasdelen
Articles