One reason why the market for Real Time Locating Systems (RTLS) is growing rapidly to pass the billion dollar mark well within 10 years is technology. It is improving rapidly, with new variants for the many new subsectors of the market that are emerging. Indeed, without new, affordable technologies to cover ranges from centimeters to kilometers and other parameters differing by many magnitudes, the predicted huge market for RTLS that is shown below will not be created. 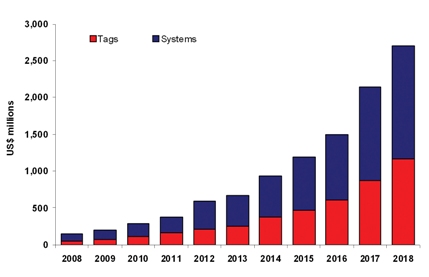 Sharp Improvements in UWB RTLS
Ultra Wide Band (UWB) RTLS usually gives the best accuracy and best immunity to interference in and out. That has come at a cost, limiting it to the quality end of the market. However, Time Domain has just announced a low-cost version of its system, and Ubisense has announced a system that combines passive UHF and active UHF on automotive production lines. Ubisense already combines two signaling techniques Time of Arrival (TOA) and Angle of Arrival (AOA), which we explain below, for superlative performance. The functionality is also rapidly improving with advances in UWB, such as the DecaWave chips that use Time Difference of Arrivals (TDOA) favored by market leader WhereNet but have much added functionality such as mesh networking and much longer range than has previously been possible with UWB.

Hand-held readers
Increasingly, the more sophisticated systems have more than a fixed infrastructure. For finding goods on foot, even outside the fixed reader network, hand-held readers are increasingly offered as an extra facility. Indeed, at the bottom of the market, the Loc8tor hand-held reader, used without fixed infrastructure, has had huge success in the last year. Although some may refer to this as primitive, its range and functionality exceeds that of some far more expensive fixed systems. It can set ring fencing alarms to protect assets and children etc. The tag can has an alarm button and flashing light and the hand-held device vibrates, shows vectors and lights up. Up to 25 tags can be programmed with a large menu-driven screen.

Both Active and Passive RTLS Have a Place
Active RFID RTLS will not necessarily be replaced by the new passive tag RTLS. For instance, where sensing inputs must be recorded in the tag, active RFID is required and it is difficult to see how it can ever perform full mesh networking where tags talk to tags in scalable, fault tolerant systems. Active tags are also needed where there is a need to initiate a signal as with a nurse’s alarm pendant. Ubiquitous Sensor Networks (USN) are being researched in many places across the world. RTLS and USN are converging.

Energy Harvesting
Energy harvesting is likely to be important for much RTLS and for USN. This is where photovoltaics or other methods are used to charge batteries during use. Indeed, there are now the painfully named “supercabatteries” in the laboratory that combine the virtues of both batteries and capacitors. In photovoltaics, there is rapid progress with various inorganic and composite formulations being printed reel to reel for low cost and easy use because they can be stuck to uneven surfaces, like tags.

Choice of Signal Processing
There are different signal processing techniques used even at given frequencies, and sometimes more than one is used in the same system. To improve the poor performance of Cell ID (i.e. zonal RTLS), infrared has been used with the same tag, and some systems also provide GPS or GPRS location. For active RFID RTLS, the main options are shown below. Cell ID is losing share because it is quite expensive yet has one of the poorest accuracies. It consists of having many readers with overlapping ranges. All other systems use beams of electromagnetic radiation, which is more precise. 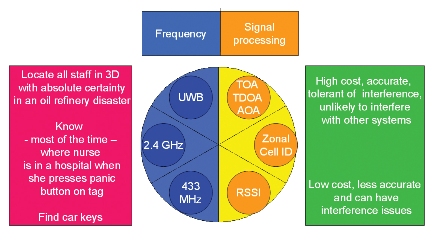 Zonal or cell ID refer to having many readers with overlapping ranges so the accuracy is poor, being simply the range of the reader. This is losing market share, though some are sold with the enhancement and extra cost of infrared sensing. Received Signal Strength Indication (RSSI), a low-cost method (e.g. Loc8tor) that is even used for some mid-range systems (e.g. Awarepoint), when its problems accuracy and of metal and water disturbing the signal are overcome by high reader density, the system still being competitive on price. Indeed, with plug-and-play and self-calibration due to ZigBee backhaul, the Awarepoint RTLS is highly rated, and over 30 such systems have been sold in a short time.

Two Conferences Will Give the Latest News
Two impending conferences will give the latest news and analysis of the rapidly expanding RTLS technologies and applications. RFID Europe September 30-October 1 in Cambridge, United Kingdom (www.idtechex.com/RFIDEurope) and Active RFID, RTLS and Sensor Networks, November 5-6 in Dallas, Texas in the US (www.idtechex.com/active) will both have many RTLS proponents and users speaking and attending.

The US event will have RTLS suppliers Q-Track, Awarepoint, Sonitor, Loc8tor and others speaking and many end users. Indeed, it will be exclusively focused on Active RFID, RTLS and Sensor Networks. Both events will have visits to local centers of excellence in the subject — both users and suppliers.

Read Part 2 of this article with more details about RTLS: [Click here]