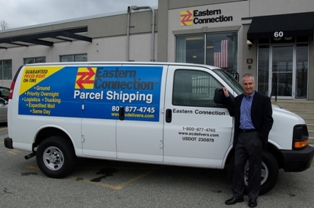 Woburn, MA—Eastern Connection in Woburn, Mass.— the largest regional parcel carrier serving the East Coast —is celebrating its founding on Valentine's Day 30 years ago with plans to expand its service area and provide new delivery options.

According to Jim Berluti, President and CEO of Eastern Connection, the company can provide earlier deliveries and lower prices than its giant competitors for next-day as well as deferred two-day service.

"We are exploring ways to further extend our footprint through our regional network of carriers around the country," said Berluti. "At the same time, the main reason for our success over the last 30 years is tied to our focus on ground service along the eastern corridor."

Eastern Connection has also made recent major investments in technology, including hand-held digital scanners and a new overhead parcel scanner system, which, according to EC Chairman Ted Kauffman, puts the company on par with, and in some cases superior to, the national giants. "A well-kept secret is that we are actually more reliable than UPS and FedEx," said Kauffman. "We've come a long way since Jim and I opened our doors on Valentine's Day in 1983."

BÖWE SYSTEC: Branching out into postal and parcel logistics
DHL Express Certified in the U.S. as a Top Employer for 2017
DHL Expands Global Partnership with WE by Honoring Young American Leaders
{top_comments_ads_mobile}
comments powered by Disqus
{bottom_comments_ads_mobile}