Have you noticed that the price of fuel has been going down?
Here is the history of the last 5 years. 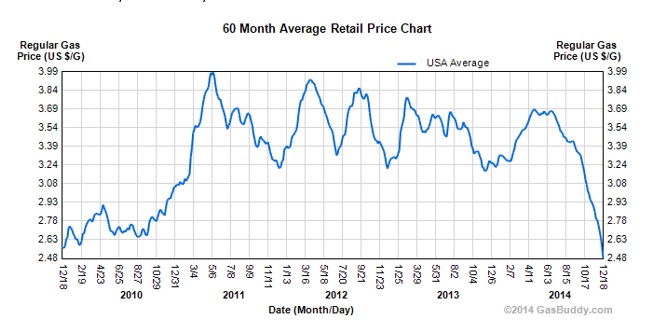 Up until April of 2011 Both FedEx and UPS charged the same fuel surcharge.

Obviously as the cost of fuel has come down, you would expect the carriers to charge less for their fuel surcharge.

Remember all those years the integrators “baked” percentages of the fuel surcharge into their base tariff? What ever happened to that? But I digress.

In any event this difference in the fuel surcharge is most often not appreciated by shippers using FedEx and the difference rarely comes up, unless the FedEx rep brings it up in the conversation. For most shippers unless they are using the services of a consultant or have sophisticated modeling software can’t even calculate the benefit of the difference between UPS and FedEx when doing a competitive bid comparison. Further complicating matters is that the base air rates for Fedex and UPS are not the same, with UPS having slightly lower base air parcel pricing.

So what happened yesterday with the FedEx earnings announcement (they did awesome by the way with earnings per share were up by 36%) was just fascinating to me.

Read what Alan Graf the EVP and CFO of FedEx said yesterday:

Understanding the net year-over-year impact of fuel on our results involves three key considerations: Timing lags and adjustments to our fuel surcharges, the structure of the fuel surcharge tables, and the manner in which we purchase fuel.

Our fuel surcharges for Express and Ground incorporate a timing lag of approximately six to eight weeks before they are adjusted for changes in fuel prices. For example, the fuel surcharge index in effect at Express in November was set based on September fuel prices.

Additionally, the structure of the fuel surcharge table for Express and Ground does not adjust for direct changes in fuel price but allows for the fuel surcharge revenue charged through our customers to remain unchanged as long as fuel prices remain within certain bands.

Finally, we purchased fuel under contractual arrangements tied to various indices around the world. Approximately 75% of our jet fuel is purchased based on the index price for the preceding week, with the remainder of our purchases tied to the index for the preceding month, rather than based on daily spot rates. While a daily spot price of jet fuel declined almost 30% from the end of August to the end of November, the average monthly price we paid for jet fuel under our contractual arrangements did not change by corresponding amount.

As a result, the average price per gallon for jet fuel in Q2 only declined 8% quarter over quarter or 10% year over year. Collectively, these three considerations effect the net impact of fuel on our results in the short-term and expanded discussion of the net impact of fuel is available in our first quarter 10-Q and will also be available in the second quarter 10-Q when filed tomorrow.”

The prepared statement is all marketing spin in my humble opinion.

Now what do I think this means? My gut tells me that FedEx, in despite of rapidly falling fuel prices, I suspect, plans to revise the tables by which it sets the fuel surcharge, to more closely align itself with those charged by UPS (perhaps go back to matching the UPS tables) and take another hidden rate increase on Feb 2. If they match the UPS tables they may not lose any customers over the change.

Most shippers contracts say that they agree to the terms and conditions published by the carrier on their website the day of shipment. What that also means is that the carriers can change a rule, at will, without prior notification (in almost all cases) and you may be stuck with this additional cost if you currently employ the services of FedEx.

So I thought I would give you my prediction for 2015. We already know the GRI (General Rate Increase) which for most shippers may be more than the “average” 4.9%. Much has already been written about the increase being mostly in the low weights and the minimum charges not to mention the increases in the accessorial charges.

Second the elimination of the waiver for the first three for domestic ground parcels, making them eligible for dimensionalization come January, which many predict, will be the mother of all cost increases for shippers.

And now, let me be a prophet of FedEx profits and suggest that there may be another surprise cost increase in the works for some shippers. But how this increase may get justified to consumers in the face of ever decreasing fuel prices is beyond the pale.

One Expert's Opinion on the FedEx Rate Increase Next
Ship-From-Store: An Interesting Wrinkle in the Supply Chain Previous
More from Featured Articles

Protect Your Shipments During the Holidays
More From Jerry Hempstead
Articles