{TopMobile}
Related to:
regulations and compliance

Per Piece or Per Shipment: What’s the Difference?

This article originally appeared in the July/August, 2018 issue of PARCEL.

When there is a total loss of a shipment containing multiple pieces, that is, the cartons or packages on a pallet or a fully loaded trailer, the dollar amount of the recovery by the shipper is not affected by how the carrier’s limit of liability is expressed. However, when there is a partial loss, the manner in which the limit of liability is stated can mean the difference between a shipper making a full monetary recovery or only a partial recovery.

The concept of limiting liability based on the weight of the individual package originated in the international treaties governing international air carriers. Under the current treaty, the Montreal Convention, the liability of the air carrier is approximately $12.00 per pound, per piece.

Prior to the deregulation of domestic airline carriers in 1977, the airlines paid the full value of losses up to $0.50 per pound times the total weight of the shipment. After deregulation, a majority of the air carriers adopted a limit of liability of $0.50 per pound and added “per piece.”

With respect to motor carriers, when Congress passed the Carmack Amendment to the original Interstate Commerce Commission Act, the intent was to make carriers fully liable for cargo loss and damage with certain limited exceptions.

However, beginning with the passage of the Motor Carrier Act of 1980 and continuing through today, motor carriers have published ever lower limits of liability in their tariffs… starting with $50.00 per pound in 1980 and continuing through the present time down to as low as $1.00 per pound. Additionally, the motor carriers have added language borrowed from the airlines and began stating the limit as a certain amount per pound, per piece.

To illustrate how this would come into play, please consider the following. 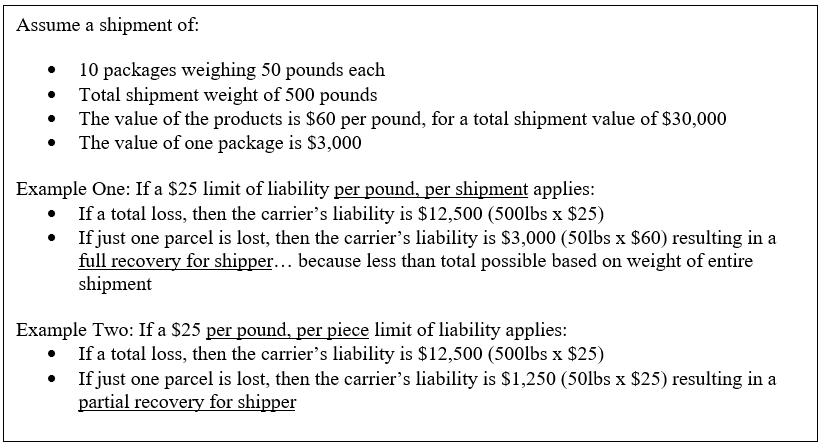 It should be noted that the limits under discussion here need to be distinguished from those expressed as, for example, “$100 per package.” When this limit is in effect, neither the weight of the lost or damaged package nor the number of other packages in the same shipment is a factor.

To conclude, and without all the math, shippers should try to negotiate a “per shipment” limit, while carriers will push for a “per piece” (per package) limit.

Brent Wm. Primus, J.D., is the CEO of Primus Law Office, P.A. and the Senior Editor of transportlawtexts, inc. Previous columns, including those of William J. Augello, may be found on the PARCEL website at http://parcelindustry.com/by-author-1130-1.html. Your questions are welcome at brent@primuslawoffice.com.

The Uberization of Parcel Next

Sanctions and Parcel Shippers: A Look at the Office of Foreign Assets Control

Loss and Damage to Cargo in International Shipments
Articles

Sanctions and Parcel Shippers: A Look at the Office of Foreign Assets Control
Articles