Being a Locavore: Regional Carrier Use and Why it Makes Sense for LTL Shippers

Talking about regional carriers, we really think of two modes: parcel and LTL. On the parcel side, the two national giants (FedEx and UPS) have really done a good job of limiting the parcel carriers, although this is changing somewhat. However, regional LTL providers continue to be successful and maintain significant portions of shippers' business. To compete with national carriers, you must provide a strategic advantage, and regional carriers have been able to do this in what I consider the three most important categories for a shipper: price, transit times, and service.

When sourcing carriers, for all the talk about service levels and transit times, the reality is that price is always at the forefront of the decision-making process. Luckily, regional carriers have some distinct advantages in this area, which they can relay to shippers in their agreements. One of the major cost drivers for LTL carriers is pickup and delivery density. Regional carriers are often quite dense within their respective areas, which often allows them to transport linehauls directly from the origin terminal to the destination terminal. Meanwhile, a national carrier would often funnel everything through a breakbulk center before making its way to the destination/delivering terminal. This density of a regional carrier’s footprint reduces miles, improves time, and allows regional carriers to lower their costs. 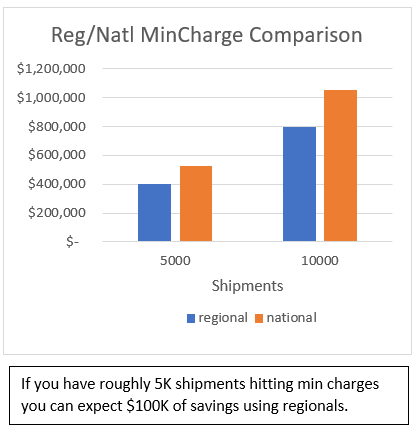 In today’s just-in-time marketplace, having faster transit times has transitioned from being somewhat of a marketable advantage to a necessity to compete. Regional carriers are most known for their next-day services, reaching most direct point destinations the next day. This is hard to find with your national carriers, and when it is provided, it often comes at a premium. Typically, national carriers will advertise next day areas with an asterisk but are hard pressed to commit unless the servicing destination terminal is the same as the pickup. Also, you will find that they have much earlier pickup time cutoffs for it to even be considered. A regional carrier will pick up as late as 6:00 pm and still deliver the next day. A national will pick up at 6:00 pm, not process it until the next day, deliver the following day, and then call it a one-day transit time. When looking at small parcel, FedEx & UPS have been improving, and slowly but surely have mitigated the overall transit benefits of the regional players. 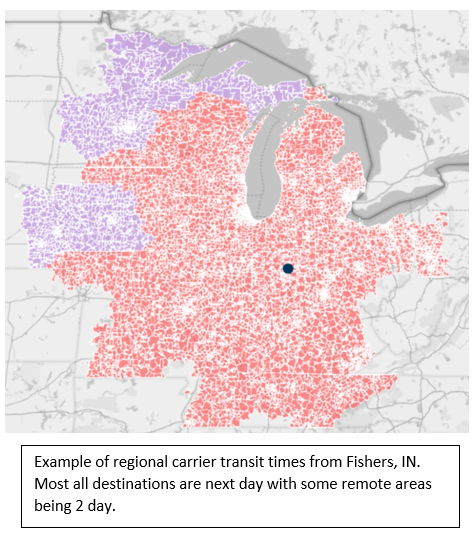 The term “service” is somewhat all-encompassing, but it is the little things that make a working relationship into more of a partnership. Even if you have a smaller account, regional carriers are often more attentive to you as a customer. National carriers really do not get this way until you eclipse a certain amount of spend. A regional carrier will always have someone who will pick up the phone, while the national’s goal is to automate as much as possible, directing you to a website portal where you can self-assist. Another important aspect is that your freight often has fewer overall touches with a regional carrier, whereas a national might shuffle it through multiple locations. Having fewer touchpoints reduces overall damage rates. Overall, the biggest service benefit comes from the flexibility of regional carriers. If you have special business requests, need late pickups, or an extra dropped trailer that day, regional carriers are often able to come through for you.

Eric Grice is a Project Manager with the Transportation Solutions Consulting practice at enVista. For more information he can be contacted at egrice@envistacorp.com or please visit www.envistacorp.com.

This article originally appeared in the 2019 May/June issue of PARCEL.

Shipping: The Only Constant Is Change Next 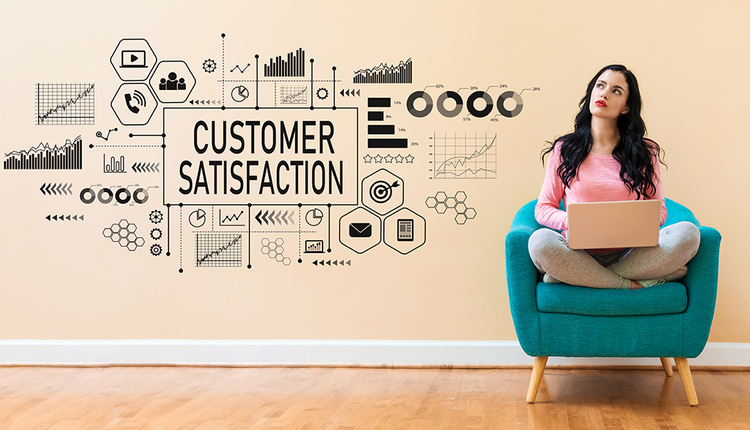 The Middle Mile Meets the Last Mile
More from Articles