A new year is often the time to implement new processes. With peak season behind us, it is important to reassess freight and parcel audit processes — what works, what doesn’t, where can you save, or even where you should start.

Freight auditing traditionally occurs when a shipper has negotiated rates with a carrier. The subsequent freight audit and bill payment strategy will include processes for reviewing contracts, performing rate audits, identifying invalid billing adjustments, and ensuring shipments are delivered on time. Let’s take a look at the four primary audit points to keep in mind in order to perform a comprehensive audit.

Freight carriers submit invoices on a daily basis, while small package providers will generally invoice on a weekly basis for each active account, including all of the shipments that were either manifested or picked up in that week’s billing cycle. There are many similarities between carrier invoices; however, how claims and credits are managed is very different. Of note, some carriers do not allow short payments in their standard invoicing processes and will only issue a credit for claims that were approved in a future billing cycle. On the other hand, other carriers do allow adjustments to be made in advance of payment and will approve the claim and adjust the amount due prior to payment. This point is important because the audit process and timeline for claim submission will be dependent on the carrier and type of claim.

In order to perform a comprehensive audit, it’s important to focus on these four audit points:

4. Compliance including over, short, & damaged (OS&D)

The purpose of a rate audit is to ensure that a shipper is billed per the original negotiated rates in an agreement and published carrier tariff. Rate audits are the least likely to result in consistent savings but can result in the largest claims if an error is made on the invoice. Most often, rating errors are identified when new agreements are executed or accounts are created that need to be inclusive of a shipper’s rating agreement. A good rate audit ensures that all of the negotiated discounts, incentives, and other agreed-upon terms are invoiced per the agreement. The rating process requires that carriers are able to capture the service, zone, weight (billable, including DIM), and shipper information. Based on this detail, auditors should be able to confirm that all charges are invoiced correctly.

The billing adjustment audit confirms that any invoiced accessorial charge was accurately billed based on the shipment information. There are many accessorial fees that can be assessed on a package. Just because a shipper incurs a residential surcharge or address correction does not mean that the charge is valid and should be approved for payment. A good example is an address correction. Often, carriers will assess this fee if there is any difference between the consignee address provided on the manifest and the actual delivery address. Regardless of the extent of the difference, an address correction can be applied by the provider. Often, these charges can be disputed and reversed if a shipper has proof that there was not a material difference between the two addresses. This particular charge also is an exception to highlight if a shipper is consistently receiving a surcharge for packages shipped to the same address. In that case, the billing audit should result in reference data clean-up that will eliminate the potential to incur the charge altogether. Billing adjustments are very common, but they can be difficult to identify without the proper tools. If a shipper is not reviewing these charges and validating they should be applied, money is being left on the table.

Of the audit points, the ability to identify packages that were not delivered on time will result in the most consistent cost savings and the highest return. Unless there is a valid exception reason, a late package will result in a credit for the transportation expense, presuming a waiver for late shipment filing is not included in the terms of your agreement. Both carriers’ networks are designed to deliver packages on time, but often anywhere from two to five percent of packages do not meet the service commitment. The percentage of late packages increases significantly around seasonal peaks, to the point that both providers waive the service refund rights of all shippers for everything but express or overnight packages from the end of November through Christmas. The window to file for a late package is only 15 days from the invoice date; therefore, it is important to implement a process that identifies these exceptions quickly and to have resources in place to rapidly file these claims. Beyond the credits obtained from service failures, understanding how each provider is performing by service level is critical. Late deliveries directly impact the customer experience and, if not reviewed, can have an impact well beyond transportation charges.

In addition to auditing the charges submitted on an invoice, the audit process should also look for invalid shipments, duplicate shipments, and support the process for filing for lost and damaged shipments. Compliance auditing is best supported when the invoice data received is validated based on the manifested detail. Supplementing the invoice with the shipment or order information will ensure that a shipper is not billed for shipments that are not their own, that shipments planned but not delivered are tracked, and, in most cases, will include enough order information to help facilitate damage claims.

In summary, the audit points above will ensure that a shipper is not only correctly billed, but also that the shipments are delivered on time. Shippers need to be diligent about how much they are spending and saving on parcel shipping. Terms are ever changing, forcing companies to strategically develop, implement, and continuously refine a freight audit processes that better analyzes parcel spend, identifies significant savings, and delivers a competitive advantage for the company. 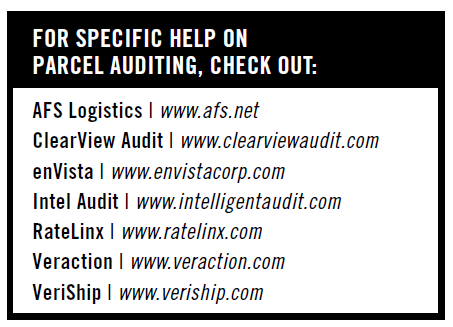 David Wedekind is Director of Operations at enVista. Within this role he is responsible for the implementation and management of all freight and audit parcel customers across enVista’s Carmel, Indiana, Ellesmere Port, England and Hyderabad, India offices. Wedekind began his supply chain career in 2008 as an analyst with enVista, responsible for freight audit. He then became a TMS implementations consultant and is currently a director of operations.

The Politics of the Supply Chain Next