By Keegan Leisz
With the start of 2020 upon us, the UPS and FedEx general rate increases are impacting shippers’ transportation spend. This year, as with years past, UPS and FedEx increased the price of their transportation services as well as some key accessorial charges. However, in addition to the rate changes, both national carriers announced significant changes in how they would classify two accessorials: Delivery Area Surcharge (DAS) and Delivery Area Surcharge – Extended (EAS). These accessorials are assessed based on the service level and the destination ZIP Code of a shipment. In the national carriers’ GRI announcements, each carrier announced they would be adding about 1,500 ZIP Codes, changing the classification from DAS to EAS or vice versa for about 2,500 ZIP Codes, and removing about 800 ZIP Codes from these lists. This is the first time in several years that more than a handful of ZIP Code have changed. These changes should leave shippers with three questions:

1. Are these changes meaningful?

2. How will they impact costs?

3. What should we expect going forward?

The impact of the changes to the DAS and EAS ZIP Code list is much more difficult to determine than the typical rate increases, and likely will impact shippers differently based on shipping patterns. However, the US Census population data from 2017 can be used to figure out what portion of the US population was in a DAS or EAS ZIP Code before and after the changes. This should give a macro level view on whether these changes are meaningful. Here are the results after doing this: 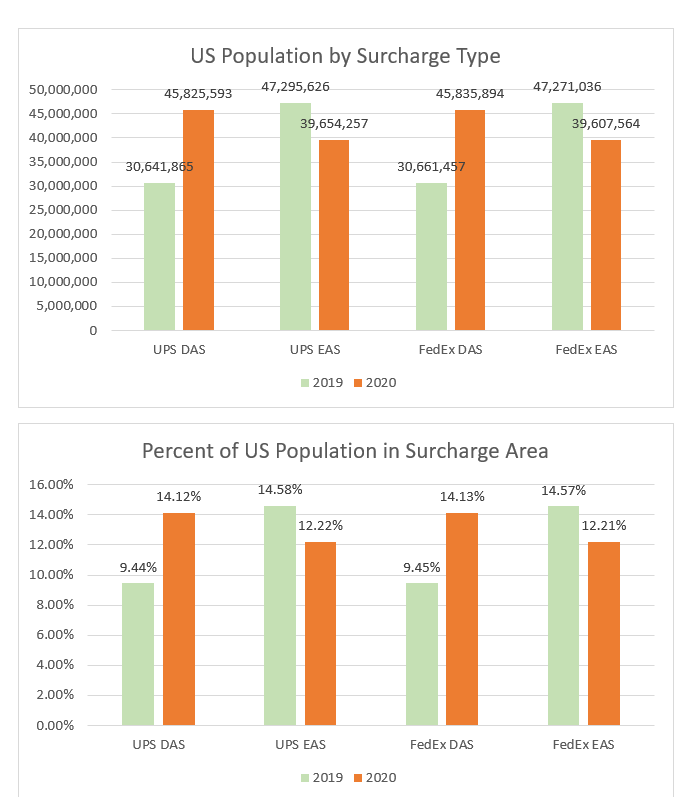 Based on these results, the population that is in a DAS or EAS ZIP Code increase by about 9.65%. While 9.65% may seem like a meaningful increase, it does not definitively answer the cost question since the EAS coverage, which is the more expensive of the two charges, decreased. In order to determine the cost impact, a frequency of each charge needs to be calculated. For the purposes of this analysis, the population in a DAS/EAS ZIP Code divided by the total US population can be used for frequency. The frequency can then be multiplied against the national carrier’s list rates to get an estimate of the DAS and EAS cost per package. Here are the results of this analysis when using the UPS rates:

When you look at each service group, you can see that the rate increase after factoring in the frequency change is much higher than the rate increase without using the frequency. As mentioned earlier, these results could vary for each shipper based on their shipping patterns, but at a macro level, this tells us that the DAS changes, after factoring in the ZIP Code changes, will lead to a double-digit percent increase for each service group.

In order to predict how these ZIP Code lists will change in the future, it is important to see how the profile of the new ZIP Code changed vs the old ZIP Code. In theory, DAS and EAS charges are meant for remote locations that are not densely populated. So, looking at the changes in population density would be a good way to see if there are any trends in these changes. Here are what those numbers look like for UPS (FedEx is almost identical) 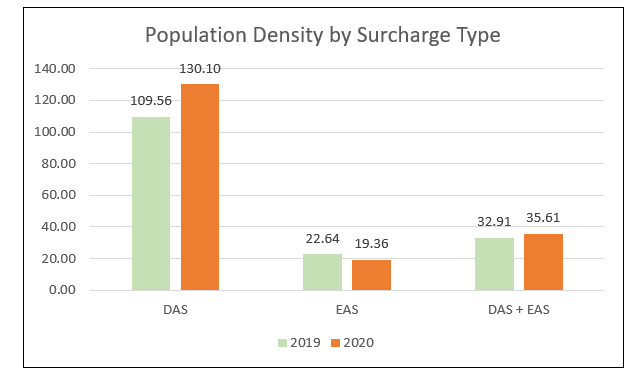 In order to mitigate these changes, shippers can always look to renegotiate their small parcel agreements. Using these population numbers, negotiating aggressive discounts on DAS charges could become increasingly important as the DAS ZIP Code become less rural. However, shippers should still analyze their own network to see if these changes will have the same impact to them as they do on the national level.

Keegan Leisz is a Senior Consultant at enVista, a global consulting and software solutions firm. In his role, Keegan is responsible for negotiating parcel carrier contracts and specializes in analytics. You can contact him at kleisz@envistacorp.com.

This article originally appeared in the January/February, 2020 issue of PARCEL.

Preparing Your Final Mile for the Coronavirus Next

To 3PL, or Not to 3PL? Previous
Related 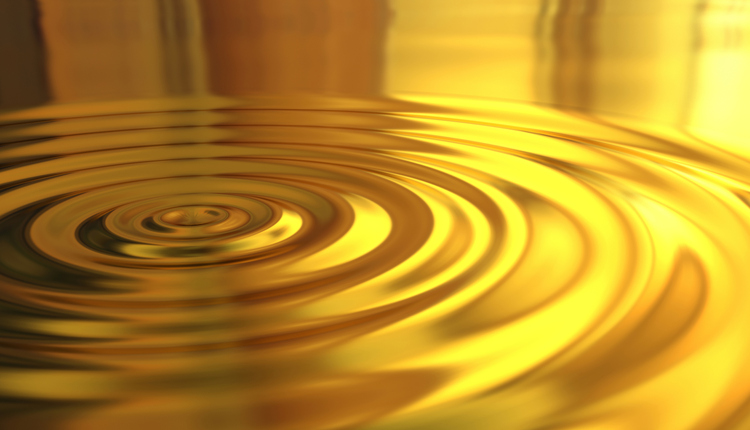