This article originally appeared in the March/April issue of PARCEL.

This is the next step in the evolution of fuel surcharges. Historically, these two carriers were in lockstep for almost five years (2006-2011); their fuel surcharges and indices were exactly the same. In 2011, they began to diverge with different fuel surcharge indices. In 2015, both carriers adjusted their indices to match a cheaper fuel market. This latest change will align more closely with continuously changing diesel prices.

Depicted below are each carrier’s ground fuel surcharges for 2016, using the monthly method vs the new weekly method. The two most obvious observations are: the fuel surcharge follows the fuel prices more closely, and the weekly fuel surcharge calculation is higher for approximately half of the year. 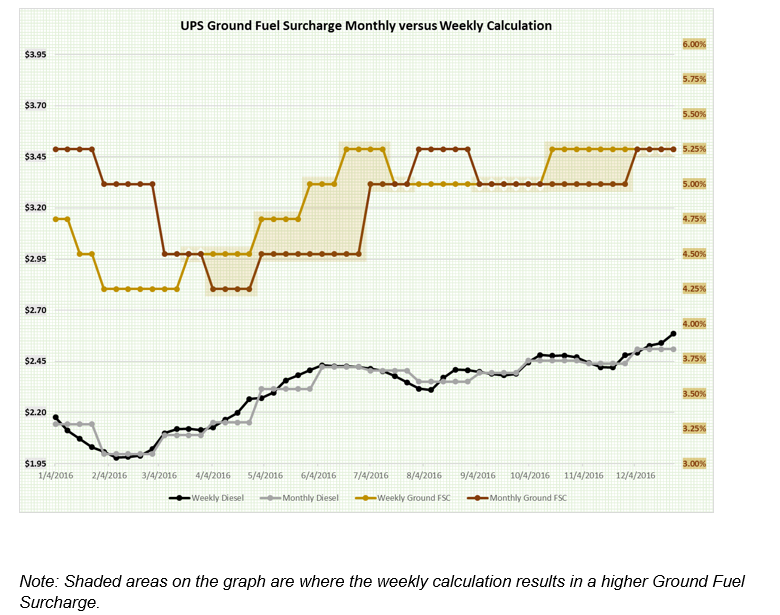 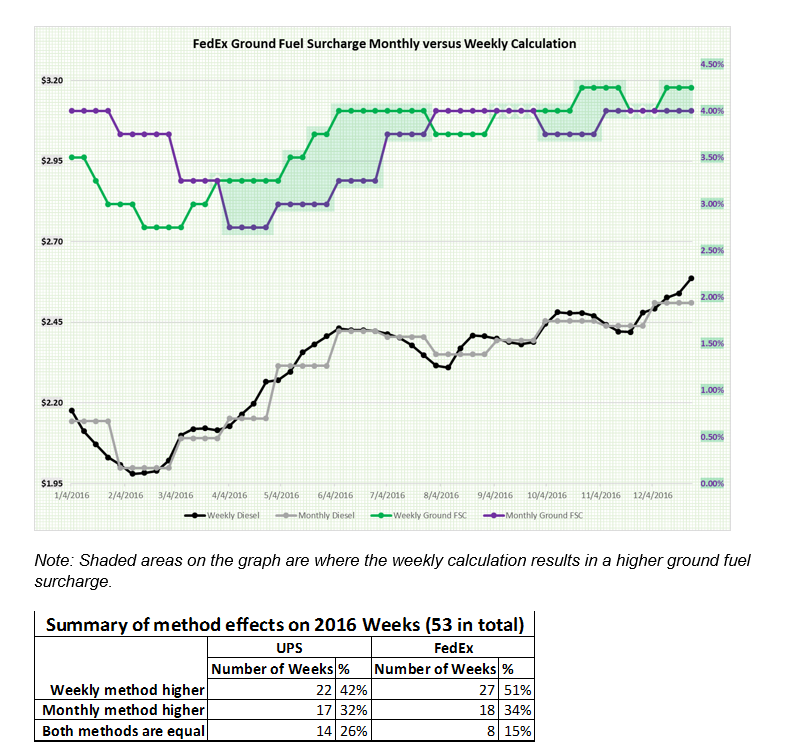 What Are the Expected Impacts of This Change?

The impacts to shippers are dependent on many program-specific parameters, but generally, the seasonality (shipping pattern) and market fluctuation are two of the most important.

In the case of 2016, e-commerce shippers with the typical October to December peak would have received the higher fuel surcharge resulting from the weekly calculation method. This would have compounded the cost of their more frequent shipping, and resulted in a higher spend for their peak.

There are cases in which the new calculation would actually have presented a savings. The beginning of the year when volumes are typically lightest and August would have been a reduction in fuel surcharge.

If fuel prices continue to have a steady increase in 2017 as they did in 2016, shippers will have a higher fuel surcharge cost. The US Energy Information Association (the same organization that produces the On-Highway Diesel and Jet Fuel averages on which fuel surcharges are based) has forecasted that diesel fuel will continue to increase throughout the course of 2017 and 2018. Note: as with any forecast, there can be errors for either supply or demand that can drastically affect actuals.

How Can I Reduce the Effects of the Changes in Fuel Surcharge?

Every package is subject to fuel surcharge. For this reason, the fuel surcharge change compounds other GRI increases and changes (like the increased cost of the 2017 dimensional weight factor reduction). Since fuel surcharge is a multiplier of transportation and some surcharge costs, the best remediation strategies for the impacts are the following:

· Reduce the costs of transportation by utilizing the least cost service

· Reduce the frequency of surcharges on which fuel surcharge is applied (like large package surcharges, delivery area surcharges, etc.)

Mark Taylor is a Transportation Project Manager at enVista and a recognized transportation expert. He has over 16 years of experience in Transportation, most of which has been in the Parcel industry. He works with clients to guide them through contract analysis and negotiation processes as the Project Manager. With a background that includes operations, transportation network engineering, new service development, and parcel spend management, he brings a unique perspective to managing parcel programs.

Shipping Data & KPIs: Oh, Great. Another Article About Data Next

Protect Your Shipments During the Holidays
More From Mark Taylor
Articles