What the 2014 FedEx Express increase means for shippers

FedEx announced on September 18 that its shipping rates will increase, effective January 6, 2014.

FedEx Express package and freight rates will go up an average of 3.9 percent for U.S., U.S. export and U.S. import services. A slight variation with regard to this year's announcement in comparison with past increases is the fact that FedEx did not indicate that this year's rate hike will be offset by a fuel surcharge reduction — typically 2 percent.

In years past, an increase in the neighborhood of 5.9 percent has been announced with the fuel offsetting the increase to the 3.9 percent, as FedEx has announced this year. The company did not elaborate on the new approach.

FedEx Express standard list rate increases have been published, as well as increases to surcharge rates for all Express services. FedEx Ground, FedEx Home Delivery, FedEx SmartPost, FedEx Retail, FedEx Express U.S. rates to Puerto Rico and FedEx International Premium rates will also rise. Details on increases for those services will not be made public until later this year.

Despite a struggling economic climate, FedEx and UPS have continued to press forward with annual price hikes, and 2014 will be more of the same for consumers — many of whom are looking for cost-reduction opportunities themselves.

The increase for the price of FedEx Express services is not likely to help those customers; especially considering that the actual impact on many shippers will be much more significant.

The rate increases once again appear punitive for customers looking to trade down to cheaper services, with FedEx Express Saver and FedEx 2Day Air services seeing the highest price hikes, as outlined below:

FedEx however, has been a beneficiary on Wall Street. The company turned in a 7 percent quarterly profit, due to cost reduction initiatives announced last year, beating analysts' estimates. FedEx projects a 13 percent profit increase for fiscal year 2013.

Annual rate increases have become standard procedure for FedEx and UPS, its largest competitor, for more than a decade. Last October, FedEx made headlines when it announced to investors its plan to implement programs targeting a $1.7 billion improvement in annual profit by the end of fiscal year 2016.
In his keynote speech to FedEx's 2012 Investors and Lenders Meeting, FedEx CEO Fred Smith said a significant portion of the profitability improvement would come from cost reductions at FedEx Express and FedEx Services.

"We are revamping the Express cost structure through a combination of cost reductions, efficiency improvements and service repositioning," Smith said.
FedEx said it expects a significant portion of the benefits resulting from its cost-reduction plan to be achieved by fiscal 2015.
If the company's share price is any indication, the shipping giant is on the right track. During the period between December 31, 2012, and September 20, FedEx's share price moved from $91.72 to $116.83 — a rise of 27.37 percent.

But what is good for investors is not always good for customers; especially those looking to reduce their own costs in an effort to improve profits. Increases in published rates, specifically those for services receiving higher percentage increases (presumably to lessen the blow from trade downs) and increased service charges, are lining the carriers' pockets at the expense of shippers everywhere.
FedEx surcharges — from which the carrier earns a significant portion of its profit — will increase an average of 7.6 percent when the rates jump next year. Additional Handling for FedEx Express international freight services (10 percent), Delivery Area for commercial and residential shipments to Alaska (17 percent), Indirect Signature Required for domestic package and Multiweight services (33 percent) will see the highest accessorial price hikes: 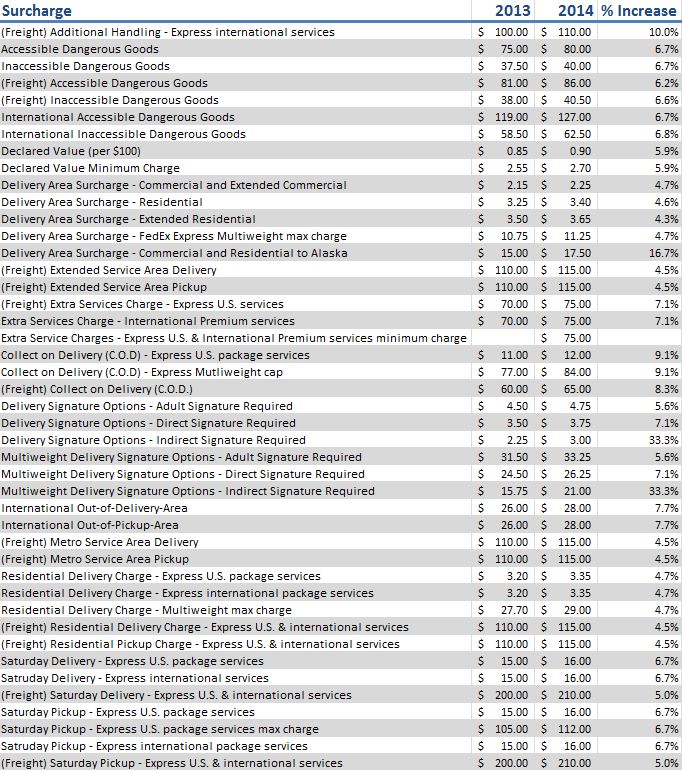 This trend continues to adversely affect consumers who have neither the time nor resources to monitor and audit dense and complex shipping invoices for late deliveries and billing inaccuracies. Each year, millions of dollars in refundable service charges are left unclaimed, adding to both the carriers' bottom lines and the customers burdened budgets.
It can be reasonably assumed that carriers leverage lack of competition and continual rate increases to force companies in nearly every industry to look elsewhere to cut costs.
Still, savvy executives are seeking opportunities to cut costs within their parcel budgets through third-party involvement and supply chain optimization techniques. Companies willing to seek outside help are consistently successful in reducing overall parcel spend by anywhere from 15-30 percent, based on individual situations and characteristics. Implementation of online parcel auditing and carrier agreement negotiation consultations are giving companies an edge in an otherwise tight window of savings opportunity.
Brandon Staton is the Marketing and Communications Manager for Transportation Impact, LLC, and First Flight Solutions, industry-leading parcel spend management firms and No. 547 on the 2013 Inc. 5000 and No. 183 on the 2013 Inc. 500, respectively. Brandon and the Transportation Impact team have helped negotiate small package contracts for some of the most well-known companies in the world, reducing their respective parcel shipping costs by an average of more than 18%. Brandon can be reached directly at 252.764.2885 or via email atbstaton@transportationimpact.com.
Cost-Savings Corner: Help! I Next
“Dude, Where’s My Data?” Previous
More from Featured Articles

Protect Your Shipments During the Holidays
More From Brandon Staton
Articles