What Five Years Means in the Parcel Business

In many respects it's hard to believe it has been that long but the real "end" of DHL in the States occurred on September 9 of 2005 with the failed integration of the two hub networks into the legacy hub Airborne had owned in Wilmington Ohio. The move of the legacy DHL operation into Wilmington brought the network to its knees for weeks and customers could not tolerate the service interruption for that long and went scrambling to cut deals with other carriers. This spiral of customer losses with its associated revenue and the increased need to invest large sums of cash into restoring the service and led to the death spiral from which there was not going to be a return as a credible domestic alternative. Perhaps in the future there may be a place for DHL as a niche player but the cost of entry is too great now and there is still a fear, uncertainty and doubt regarding service inconsistency that will reside in the minds of decision makers of that which burned them in the past.

For all intents the exit of DHL form domestic service left domestic shippers with a duopoly. I say that because although some may view the USPS as a plausible alternative they use the services of FedEx to transport much of its Priority and Express parcels. I will grant there is a place for the USPS in every shippers menu of options however, in particular light weight, residential transactions.
I thought it might be beneficial to calculate the "cost" to the consumer due to the loss of DHL from the domestic marketplace.

Currently with UPS those surcharges are 10% for air and 7% for ground.

As best as I can determine this is what has happened: 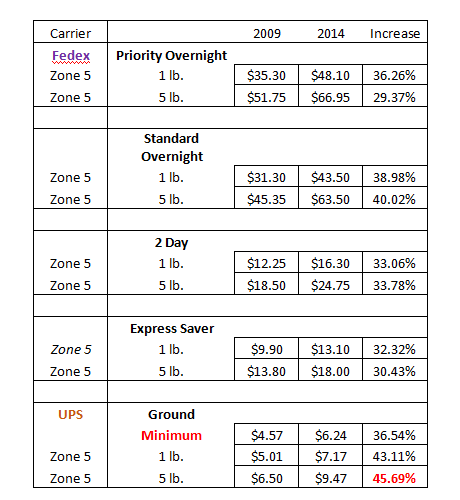 Not only has the rate for a 5 pound, zone 5, package gone up by over 45% shippers are also paying more in the fuel surcharge, a double whammy. Can you think of any other product or service that has gone up that much in the last 5 years?
Many shippers have seen a movement of their shipments being directed direst to the consumer at a residential address. The current residential surcharge for UPS Ground is $2.90. In 2009 that fee was $2.05. An increase of about 41%.
The greatest increase however was the change of the dimensional divisor from 195 to 166 in January of 2011. Not as impactful as the elimination of the "oversize" rule in January of 2007 but still significant to shippers. One has to ponder when the carriers will eliminate the 5184 cubic inch waiver of dimensional weight on ground, and or go to a 139 rule to mirror the current international rule. A word of advice to the reader that you can protect your packages from such unilateral decisions by language that prevent or mitigate the changes during the life of your contract. Unfortunately most contracts have language that reads "The rules and rates in effect on the carriers' website at the time of tender". Unfortunately this allows the carrier to change any rule they want, at any time, without notifying the shipper.
The greatest cause for concern for the shipper is the recent press citing the carriers had "more business than they could handle" in the holiday shipping season. Granted weather was a contributing factor but the volume caused a great increase in labor cost, and thus has impacted earnings, at least at UPS based on their warning to Wall Street, and the reaction could quite possibly be to embolden the carriers to be less flexible in future negotiations and or take rates up to a greater degree than they have in the past.
The best action for the reader is to make sure you have a collaborative relationship with your current carrier but also keep in regular contact with their competitor. The weapon one always has is to move your business to the salesperson hungry for your business. Most carrier reps are on an incentive compensation plan that hurts them if you move your business to another carrier, and rewards them financially for capturing your traffic away from their competitor. It's important to keep that knot in the tummy of your incumbent rep that you might someday leave, and to dangle that carrot in front of the competing peddler.
The reality is that rates are going up and are going to continue to go up and due to the lack of competition and those rates are going up greater than the CPI. You need to have a clear method and means to be able to calculate what the impact is going to be on your employer based on your book of business. The announced annual "average" percentage by the carriers is not a measure, by any stretch of the imagination, on what the rate changes are going to mean to your budget. There are tools to help you do that.
Lastly the parcel business has become very complex and its worthwhile to invest in expert advice not only at contract time, but on an ongoing basis because there is one constant in the parcel business and that is "things change".

Protect Your Shipments During the Holidays
More From Jerry Hempstead
Articles